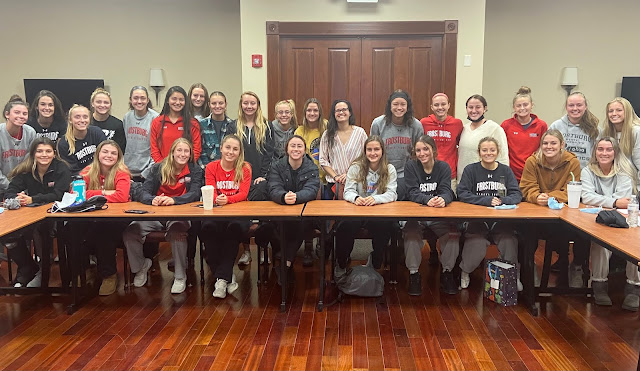 Competitive sports and soccer in particular, can be cruel at times.  I'm not sure there's a team sport quite like soccer where one team can do so many things well in a game and still get outscored.   A sport where the performance of the teams is more inconsistent with the final score of the game.   So, an obvious challenge for players and coaches is to realize that playing well, putting in a good performance, doesn't mean you'll always win.  The tougher realization is that without that consistent good level of performance, you know your chances of winning decline.  So, good competitive teams have to be mentally tough and realize that eventually, throughout a given season, you're good preparation and energy and commitment and skill will eventually put you in a position to win some games.  You hope the right number of games and at the right time of year.
Our success at Gettysburg this week does feel like it was truly earned.  Our players have shown tremendous determination and spirit through an early season that has delivered us some difficult score lines.  Great timing for our team as we prepare for conference play to begin this weekend.

In spite of a rough start this season in terms of the scorelines, there's evidence every week that we're improving as a team and can produce quality moments in our games.  This goal was a great example of the kind of team goal we aspire to produce in our stadium more often.  Great stuff from Gwen Schemm, Hailey Turney, and Emily Lehman.

It was a tough weekend in terms of results for our team.  We allowed a team to beat us that only earned 1 shot on goal and then played a tough New Jersey team in Montclair State that's going to win lots of games this year for sure.  Although, we are disappointed with the scoreboard, we're learning more about our team and getting better every day.    We also realize there are lots of ingredients in a team and our shared experiences on and off the field will help make us the best 'team' we can be.  Spending some team time in New York City for dinner, shopping, and pictures is always a bonus traveling in that region.
Home games this week and next in Bobcat Stadium!

Frostburg WS on the Web: