We had a great weekend overall in Baltimore for the 2014 NCAA Tournament first-round weekend. It seemed like our team had a crazy year of results and the NCAAs were a good example - we scored 3 goals in an NCAA game in 15 minutes!  We also allowed 3 goals in an NCAA game and were still in the game with a chance to advance.  Unfortunately, our fortune in the penalty kick shootout ran out on Saturday night and after a draw with the 19th ranked team in the nation, we did not prevail in the shootout and did not advance.  It was a dream start scoring 3 goals to open the game but our opponents came back into the match and tied it with only 4 minutes remaining.
Overall, we had a terrific year, winning our 2nd CAC Conference title in 3 years and many of our players will be honored for their commitment and hard work on the field and in the classroom in the coming weeks.

Our Seniors have a tradition of breaking all our fashion rules in a late season practice.  Today, we had a great pre-game session in our stadium before traveling to Baltimore for our opening NCAA Tournament game Saturday at 7:30 at Johns Hopkins. 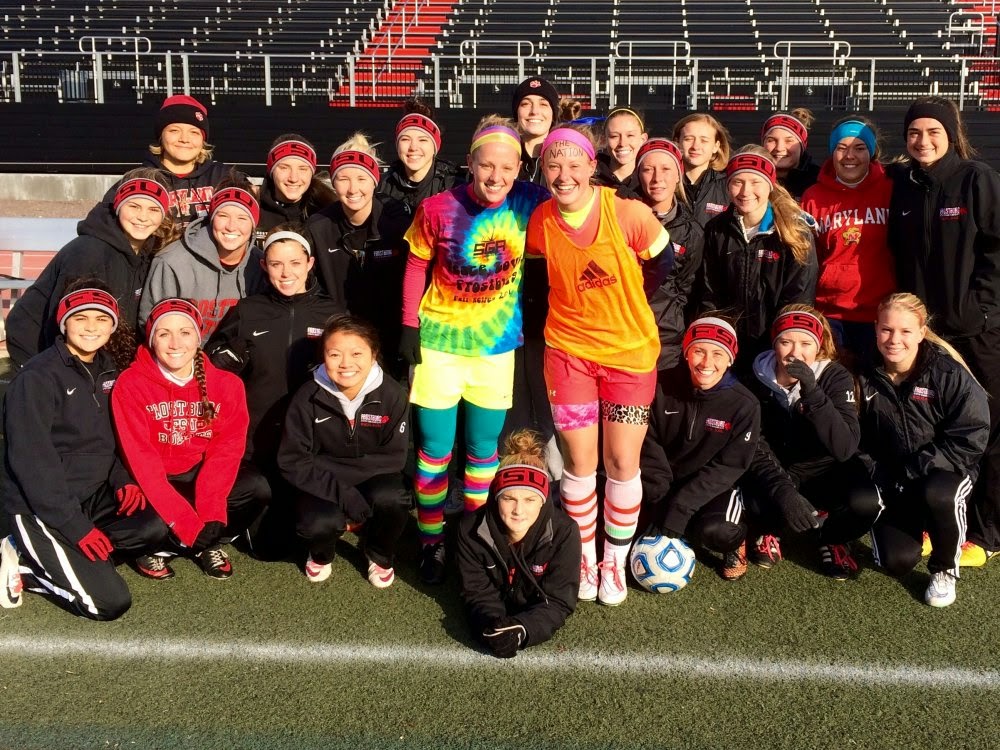 Today, we had an interesting and fun conclusion to our scrimmage as we prepare for the NCAA Tournament.  We'll kickoff at 7:30pm on Saturday night at Johns Hopkins Homewood Field vs SUNY-Geneseo.  Should we advance, we'll play again there Sunday at 5pm.
NCAA's at Johns Hopkins Link

A running theme with our team this year is that we have a habit of making things a bit more difficult than they should be.  Well after missing 3 PK's in the run of play Saturday on 3 different fouls, thankfully we scored 2 other terrific goals and captured the CAC Conference Championship here at FSU!  Its the 8th Conference Championship for FSU Women's Soccer in the past 14 years.  We'll find out on Monday where our season will continue in the NCAA Championship Tournament next weekend.  The Selection Show will be webcast at NCAA.com Monday at 1:00pm.   NCAA D3 Soccer Link

Playing for a Championship!

Every soccer player and fan knows that soccer is sometimes a crazy game.  In the past 3 years we've both advanced and been knocked out of our conference tournament in the Penalty Kick Shootout.  In 2012, we won the CAC Title after PKs and have advanced in the NCAA Tournament after shootouts as well.  Last night, the most improbable outcome in our conference tournament occurred.  We won a shootout at top-seeded CNU while Mary Washington beat #2 Salisbury.  Those results mean we get to host the CAC Championship here at FSU on Saturday at 2:00!!

This is our 12th Appearance in a Conference Championship Game in the past 14 years and we've won 7 to earn NCAA bids.  Should be a great day for soccer in Frostburg!

A phrase used often in the post-season when every game is an opportunity to continue your season and march toward a championship.  We needed all 90-minutes to get the one goal required to defeat York on Saturday and will now travel for a CAC Semifinal at Christopher Newport.  We played well in a 1-1 draw with CNU on our Senior Day just a couple weeks ago so it should be a good competitive game.
Kickoff is set for 6:00 at CNU on Wednesday night.
Live Stats and Video

Frostburg WS on the Web: